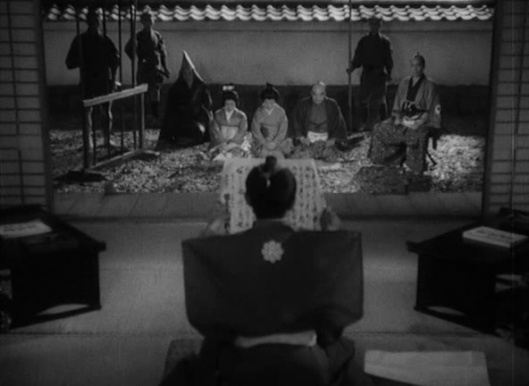 Life in 17th century Japan certainly wasn’t easy for women if The Life of Oharu is anything to go by. I really loved this movie about a beautiful young woman. First Oharu is a courtesan at the Imperial Palace. When she gives in to a lower class retainer’s advances, she’s found out. Then she’s banished from Kyoto. Her parents are also banished because they failed to guide their daughter properly. When they’re led out of the city, soldiers keep back their loved ones separating them with a pole as they proceed to the city limits in tears.

Oharu’s lover did not get off scot-free. He was beheaded after dictating a letter urging Oharu only to marry for love.

After a long banishment, Oharu lucks out. An emissary from an important lord must hunt for the perfect courtesan. The requirements are so specific. Feet must be a certain length, certain earlobes, background, talents. No one fits all the criteria — no one except Oharu. At first she kicks and screams, but eventually she goes to Edo (now Tokyo) where she delights the lord and infuriates his wife. She bears the lord the desired male heir and things are looking up. She finally feels at home, valued. However, the wife, who’s jealous of her husband’s fondness for Oharu, sends her packing with very little cash. Oharu’s father has over extended himself in business thinking he’ll be taken care of for life as his daughter bore the heir. The film continues to show this poor woman’s hardships and to reveal how precarious life could be in this highly structured society. The acting is superb and the story compelling as I had no idea what to expect. I really was shocked that Oharu was tossed out after producing a royal heir. 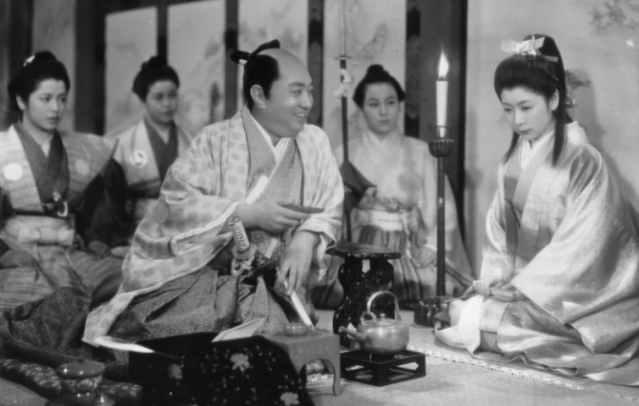 With the emperor, before she warmed up to him

While the film is melodramatic, there’s humor such as when a prostitute drags a man into an inn, while he’s calling out, “I’ve got to get home to my wife.” Based on the novel, The Life of an Amorous Woman, this film is beautiful with images that will stick with you. For more on the cinematography read this essay on the Criterion Collection website.