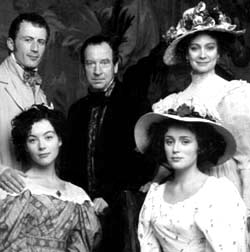 I finished the BBC’s Wives and Daughters, a very satisfying mini-series. I’ve learned that the author Elizabeth Gaskell didn’t finish this novel so the ending is conjecture. Intriguing . . . I wonder if she’d told anyone how she wanted the story to end.

As I posted earlier, this is the story of Molly Gibson, a fair, down-to-earth young woman whose mother died when she was a girl. Molly’s father remarries when he sees his daughter blossoming and young men falling for her. Suddenly, Molly needs a mother. Enter Hyacinth, a fussy, social climber with plenty of airs and her daughter Cynthia. Luckily, the Gibsons and the viewers fare better than Cinderella. While Hyacinth starts by getting rid of all Molly’s furnishings, which were her mother’s, and she can be a gossip and eavesdropper, she isn’t evil or oppressive, just annoying. Cynthia is more pampered and self-centered than Molly, but she’s also a dear friend to Molly and she’s aware of her own failings. So Molly lucks out in the stepsister area too. Thank you, Elizabeth Gaskell, for your light touch: just enough conflict and flaws to make for a good story.

Cynthia does bring secrets and problems to the Gibson’s calm home. When she was 15 she promised to marry Robert Preston, a slightly shadowy land agent who lent her 20 pounds. At 20 she has no intention of marrying Preston and in fact agreed to marry Robert Hamley, whom Molly pines for.

There are quite a few familiar faces in the cast. Dr. Gibson is played Bill Paterson, who was on Law & Order: UK. Cynthia is played by MI-5 and the new Upstairs Downstairs‘ Keeley Hawes. Tom Hollander, who played the unctuous Mr. Collins in Pride and Prejudice plays Osborne, Robert’s older brother who starts with such promise, but brings his family heartache.

I got a kick out of the costumes here. The more lace one wore, the better off or I’d say the more pretentious the person was. Molly usually donned more streamlined dresses whereas Hyacinth and some of the townswomen were drowning in lace, though I suppose the gigantic puffy sleeves they wore could act as floatation devices in an emergency. Less is more, ladies.

I enjoyed Molly and her friendships with Cynthia, Osborn, Mrs. Hamley, the Squire. She brought out the best in people. She wasn’t a doormat, but she wasn’t overly rebellious either. I marvel at how 19th century characters are so often articulate, wise and fair-minded even when arguing for their lives, or if not lives, their love lives and freedoms.

How do these people remain so respectful? So civil at all times? What have we lost? 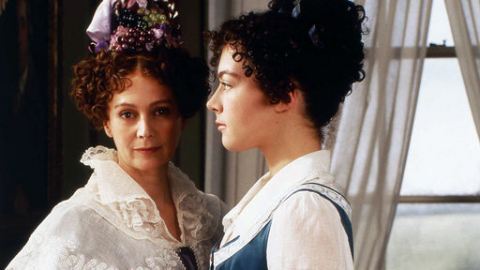 The BBC production of Elizabeth Gaskell‘s Wives and Daughters isn’t as well-known as say Pride and Prejudice or Emma. Gaskell is a writer I just learned about a year ago, but I’m liking her more and more. I loved Gaskell’s novel Cranston and the BBC production of her North and South was quite good.

Episode one of this 4 part series introduces viewers to Molly Gibson, a young girl who’s mother’s died. She gets lost and is brought to a huge country home. Cut ahead ten years later and her father, a country doctor decides to wed because Molly suddenly needs a mother. Of course, his choice shocks Molly. Molly doesn’t feel she needs a mother and she knows she won’t like Hyacinth, the finicky woman Dr. Gibson chose.

This Cinderella story works as they almost always do. There’ll be more as I work through the series.